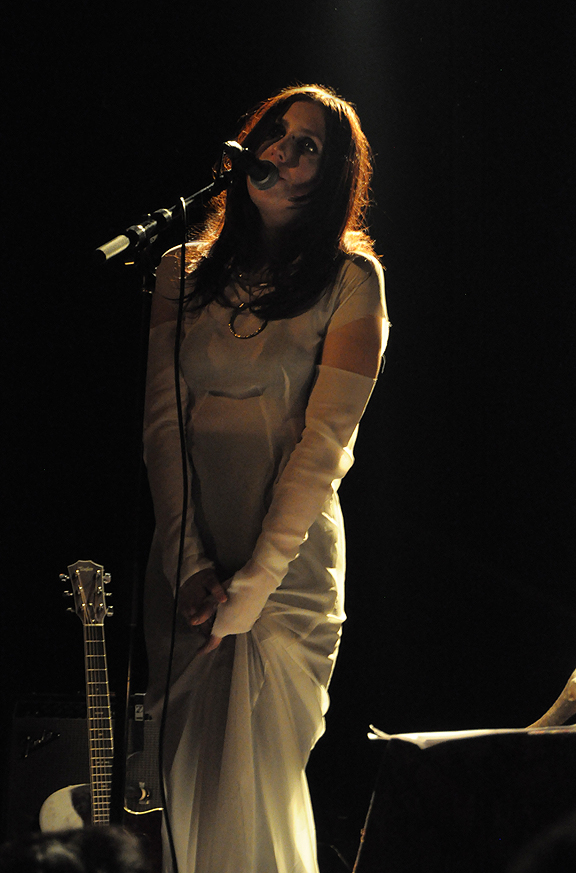 One of the problems with drugs is there will never be another first time.  It can only happen once. By not realizing this you can the dragon trying to recapture the majickal first time. Chelsea Wolfe is aware of this fact because each time I have seen her perform it has been a different experience. This time was similar to the first time I saw her on the Apokalypis tour opening for Russian Circles though the difference here is the show took on a much different feel. But I'm ahead of myself...

True Widow took the stage an hour after the doors opened. They were very casual in their presentation, at one point the guitarist asked for more lights on stage as "it was too dark for him to see his guitar and causing him to mess up." I own their first album but live there was the Texas twang to everything that I had not noticed before.  The guitarist reminded me of Casey Affleck from the Killer Inside Me.  Live the deliberate drag of the beat, had the plod of doom but was layered in such a coat of 90's slacker rock that it sounded like the ghosts of  Sonic Youth being pored a like molasses over the fuzz. I am interested in hearing their new album so keep your eyes peeled for a review of it here.

Chelsea Wolfe took the stage to dimmer lighting and the drone of atmospherics. The set was split pretty evenly between Pain is Beauty and Apokalypsis.  She swayed with the beat when guitar was not in hand. There was a sense she felt liberated  from being anchored behind an acoustic guitar as she had on the previous tour and the new material seemed to bring a new fascination of expression in the live setting for her and the With a full band the older songs are always going to sound fuller , the new songs held up well against her more time tested material which bodes well for Pain is Beauty, though there was an obvious shift in the darkness and intensity level when the new songs started up. We Hit a Wall,  had heads bobbing upon the first strains of the beat , though the other new songs were not yet as immediately recognized.

The sheer power of these songs alone translated well live and won the crowd over.While the myriad of loops and sounds required Wolfe to employ various effects and back tracks it did not take away from the caliber of the talent required to pull the dynamics of the new songs off. Her backing band consisted of  the musicians employed on the Russian Circles tour  bassist Ben Chisholm , guitarist Kevin Dockter and drummer Dylan Fujioka. The  ghostly delay and chorus she used on her voice not to hide behind but use her voice as more of an instrument. It created better blend with the darker more electronic based direction of the newer material and blended the older songs with them. So it gave her voice more of a Cocteau Twins feel at time. Dry vocals would have sat oddly apart from the sonic wall the built so this was a wise choice on her part.

"Sick" which has become my favorite song on "Pain is Beauty" worked well live it carried more of a goth melodrama to it, Wolfe dropped to her knees in a more vulnerable position as a counter to the lyrics stronger men than you /  have tried to break me".  Her stage presence while it's always been intense seemed to have evolved with the new material . her body responds to the oppressive current of the music in a more sensual manner. She piled her hair atop her head while singing at one point and it felt like she was more comfortable in her own skin in doing this simple gesture. She is more relaxed in the darker tone.

It also was apparent that with this more tangible intensity level the live show now bring she would be able to fit more comfortably on bills with metal band. She has had cross over appeal with metal heads and has shared the stage with the more indie flavored black metal bands in the past such as Liturgy, but her new material would find her in good company for any one from Godflesh to Agalloch or even Katatonia.  There was a gaggle of college girl screaming out to Wolfe from stage left, at one point one girl screamed for Wolfe to cast a spell. This is amusing to me as her shows have held a ritual like atmosphere where the pageantry of this show was less bout the outer trappings set against her inner intensity and more of a communion with her self that created a celebratory catharsis. The second time i have seen her this year and would go see her again next week if she played which I think stands as a testimony to Wolfe as a performer who continues to evolve.