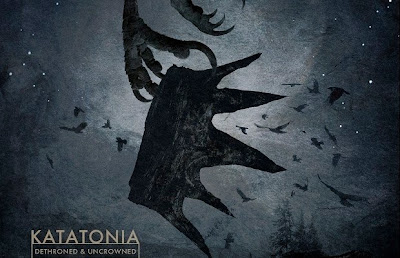 So the gloomy Swedes decided to take another stab at their last album " Dead End Kings" .  That album has grown on me, but an acoustic reconstruction of isn't much of a stretch. It works better than suspected on "the Parting" . The more organic reconsiderations given hear, allow the vocals to breathe more and the guitars open up their melodies. Things like strings and horns that haunt outside of the layers of harmony vocal are rather romantic. The use of effects on some of the wandering vocals compensate for the lack of distortion. Jonas' vocals sound  stronger here than the original version.

"The One You Are Looking For" sits more exposed in it's nakedness. The duet is more fully entangled when their voice enmesh. The instrumentation is  little too barren leaving to much in the first half of the song up to the strings. The darkness that had been whited out into a faint gray feeling on the last album has been further illuminated. The guitars take a greater role in "Hypnone", but everything else falls away. The vocal layers are interesting when everything else is peeled away from them. Jonas' melody line in the verse finds itself a little less compelling in this lighting. A little distortion creep in on the solo, dispelling this as purely an acoustic version.

Keyboards take over this version of " the Racing Heart' until the delicate guitar unfolds around, once it creeps into the meat of the song it moves nicely. The drum pattern is much softer of course and feels like a trip hop remix. It relies on the vocal layers to build the intensity. The Piano's also take over the beginning of "Buildings" but I was surprised at how well it all came back together for the chorus. It comes no where near the dynamic effect of the original. The guitarists get a chance show off their chops a little more in this version.

Songs like "Leech" seem like they need more form to function and when left at the mercy of string patches don't hold together as well. To his credit Jonas' voice sounds great up on the mic  and it's clear phrasing is on of his strengths as a singer.  He never belts when the music gets heavier so hear  in this setting its more natural. "Ambitions" comes across like something from Opeth's "Damnation" album which took a similar approach. The cleaner guitar tone giving way to the more rock solos like Pink Floyd.

In many ways this is closer to what Anathema does on a regular basis these days. The strings give the songs a slightly more gothic sound and the harder strum of guitar is used to help build choruses on songs like " Undo You". The lack of percussive elements being the main draw back on the more symphonic and barren redirections. The piano parts don't provide enough of an anchor to justify this as they do for someone like Tori Amos.

"Lethean" shows where this works better than in other cases as the tension remains intact even with the breathing room. The line "We had plans but you couldn't make it" doesn't have the same meaning with out the punch of the original accompaniment. On  " First Prayer" where the drumming had been such a crucial part , the melodies and harmonies at least show that are capable of holding down the ship, as the programmed drums patter in the distance. Jonas voice sounds stronger here as he is not having to compete to sing over the crunch of distorted guitar.

The guitars work more intricately around " Dead Letters" and give it a much more Pink Floyd sound, but it floats like a cloud with little to root the song to the earth where its roots are.  The melody by the end of the song has to work that much harder to keep by ears engaged. When it works it's pretty chilling at times at others it drifts like a ghost in the back ground trying to get your attention but unable to connect to solid life so I'll give this album a 8 out of 10 as it's very much contingent on if I just want back ground music for ambiance, despite the melodies which hooked me into the first album still holding much of the same gravity.


Katatonia - The One You Are Looking For is Not Here (lyric video) (from Dethroned & Uncrowned) from Kscope on Vimeo.