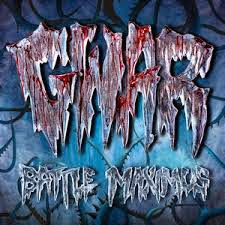 Let me start this off by saying I'm a long time Gwar fan . By long time I mean Hell-o had just come out, so 1988. I have seen Gwar more times than I can remember , because most of those highschool era shows I was tripping so hard I once thought Oderus was Steven Tyler. This is the first album for Cannibas Corpse guitarist to debut as a new character Pustulus Maximus and also features a new bass player Jamison Land taking on the mantle of Beefcake the Mighty, which is a little weird in my book, as it takes them into the realm of Kiss who slaps the Ace and Peter make up on just anyone these days, so Gwar is more of a brand and less of a band so it's surprising this new album is better than it has any business being. If I Mike , as Balsac even though he didn't play on the first album he will count as an original member for practical purposes, and even then this album only has two original members, though Roberts played on Scumdogs, so I'm sure most of their fans at this point never heard of Nippleus Erectus .

The opener isn't Gwar's strongest moment and pretty much sums up many of the reasons I fell out of touch with Gwar in the first place as it is the sort of fast thrash riff that seems to appeal more to punk rock kids. After Salamanizer from Scum Dogs it's been hard for Gwar to write a better opener and even with "Madness at the World's Core" it has grown on me but is symptomatic of Gwar of late that defaults to being run of the mill punk soaked thrash, rather than paying a close attention to groove and hooks that they once did.

Songs like "Bloodbath" and " Nothing Left Alive" have their moments but feed into the thought that Gwar is more about the show than their music, which was not always the case. With everything up to "This Toilet Earth" they could have showed up in their street clothes and rocked. The first song that stands up and makes you take notice of it " Raped at Birth" sure it takes over the top lyrics and shoves them sideways with little lubrication into your ears, but they are set to has tightly coiled  riffs to the stage for Oderus' foolishness and theatrics.

"I, Bonesnapper" is pretty decent considering Oderus gives the mic over to one of the supporting characters.  After the doomish intro to " Mr. Perfect" the thrash tinged verses give Oderus room for his insane blabbering. Though it's pretty ripping it is odd to me that the title track is an instrumental, so I'm guess it's a soundtrack for some sort of onstage carnage that prevents any one from singing. "The Triumph of the Pig Children" is the first song that comes close to having an actual vocal melody in it's verses, reminding us that Oderus can actually sing when he wants to. Because of this I'm a little more forgiving of the simple barked chorus. It gets even more melodic on "Falling" which reminds of the albums the Butt Hole Surfers made when they sold out to the radio in the 90's . It's pretty decent for what it is  and doesn't go for what at one point of the albums token power ballad.

The album closes with "Fly Now" which captures most of the classic Gwar sound , but doesn't really do anything new with like some of these songs bravely attempt to.  This isn't Scum Dogs by a long shot but for a band that is making albums to showcase their theatrics it works better than some of the less dynamic thrashing they have been up in the past decade. I'll give this an 8.5.