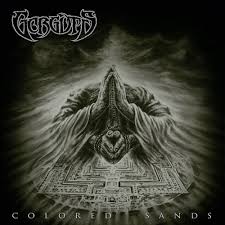 I have little trouble saying this is one of the heaviest releases of the year, but I am having trouble deciding if that equates with being one of the best. Are their good songs being written here or am I being dazzled by weighty riffs? These Canadians can write about death with conviction as this is their first album after the suicide of their Drummer Steve MacDonald.

The opener "Le Toit du Monde" lures me in with dips into the more melodic middle sections and the hint of atmosphere haunting the edges of this war machine. Some times I hear this and think..." Well these guys are succeeding where a band like Meshuggah has failed when falling prey to the expectations of the masses. Sure this album has gotten a load of accolades but that means jack and shit to me. What they have going against them here is they come out of the gate so strong here and a common problem for many metal bands is they hit you with the heaviness on the first song that leaves your ears ringing but you numb out half way through because they lack dynamics.

By "Forgotten Arrows" the math comes in and begins a more calculated dissection of its self but still hit me as being more convincing than the last one by Ulcerate. The drumming has more power behind it , yet is precise and these guys have no problem with seamless transitions in the pace. But even in the face of a technical juggernaut like this the rule applies... cool riffs alone doesn't make a good song. The vocals are the bands weakness as they are low and guttural enough to convince me they mean business but still rather one dimensional.

The title track does well to lead in softly and come back in strong as it gives the album some ebb and flow. Once they are back into the song at full blast  into the meat of the song is where it gets hard to really differentiate itself from some of the riffs that before. The solos tend to clutter the chaos than if they were given the space to stretch out. When the chords are allowed to ring out and reach for the darkness they sound better than when crammed into the more claustrophobic passages.

Though it starts of lost in the momentum like a child running down hill, "Enemies of Compassion" does develop a pretty mammoth riff that it returns to like a thematic element rather than a cheap plot device. However when these guys just straight up go into bludgeoning mode it's not their strong suit as they want to keep too many balls in the air. It's when they let the song breathe in the final two minutes that it gains the most power. They do know when to lead off with a good riff and let it groove before bringing in the circus on top of it, " Ember's Voice" is a good example of this, but it doesn't feel like the road map is very clear on where they should go when they deviate from it, until the slow the pace down and congeal around it.

They take things down to a doom pace on "Absconders". The transitions here are more like the next logical step and seem more natural than some of the jumping through hoops found in other odd places, but the song starts to be come white noise and loose my attention after the first six minutes.  Once again they drop the introduction down to a simmer before pounding you with the meat of the matter on the album closer " Reduced to Silence". They offer sparse breaths of dark cool air in-between hinting at the tension before dropping the hammer back down. This is done more tastefully than expected even though they show an aptitude for dynamics they sometimes forget when overzealous with the heavy. They find some sonics toward the  end the song with as the blur of brutality numbs into white noise. It's these more morse glances towards doom where the band makes the most music rather than banging the lowest notes they can find around.

I'll round this up to an 8 but I don't see it having much continued growth with me as my ear was caught on the initial listen but with each repeated listen it gets more obtuse and collides into slightly boring, though I do like the gray shroud wrapped around the feel of this album.