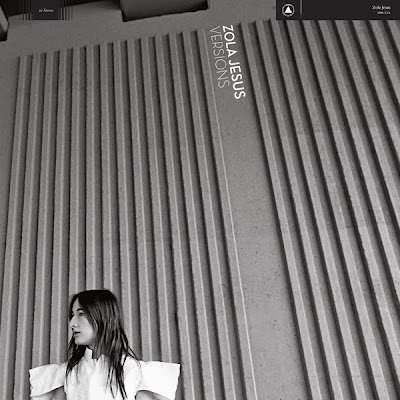 I have had this in rotation for some time now since it's August release but never got around to reviewing it since it came out around the same time as the Katatonia album which took a separate approach, but with Zola this seems to be  more dramatic turn than the normally morose, Swedish band, not that she is a bucket of laughs either but her music is so beat driven and electronic it makes this unplugged version of her work seem more like new songs.

She even takes a different approach to singing where Jonas of Katatonia  , was pretty much business as usual. This can be seen very clearly on the slow string accompaniment of "Avalanche" which is beautifully sung and arranged but not really a must listen for me."Fallback" does a much better job and allow her to open up and sing in a manner that's closer to what feel like her sweet spot. One thing that is noted about this album is she has found her own voice and is further from her earlier Siouxsie imitations , she very rarely carries her chest voice into the throaty belt that has been characteristic of her singing style up until this point ,which I think shows a good deal of maturation in her singing style. It translates well to songs like "Hikikomori" from her last album "Conatus".  "Run Me out" originally off of  Stridulum II, receives a much more somber treatment here.

"Seekir" is given a heavier nod toward her more electronic roots, and the strings propel the song along side the beat, which is not as in your face as the original version. The new arrangement of "Seatalk" really gives Zola a chance to spread out her vocal chops. It goes to show that when a song is well written it is going to be well written no matter how it's preformed if it is a song that will stand the test of time.

"Night" sheds it's 80's goth feel, but manages to feel just as dark. Her voice is a little more subdued than the original version , but its a tasteful vocal performance that serves the cello heavy new version. The beat pules in the distance before launching in when the strings build the tension.

Though well sung, "Collapse' just kind of languishes over itself, luckily "Vessel" comes in behind it and bats clean up. Every part of this one blows away the first , which was an incredible song to begin with.The strings are best employed and arranged here. Overall , she succeeds and shows a lot of growth. I  was disappointed  when I learned this was just an unplugged rearrangement of her older material so she had to win me over with this . I'll give it a 9.5 .