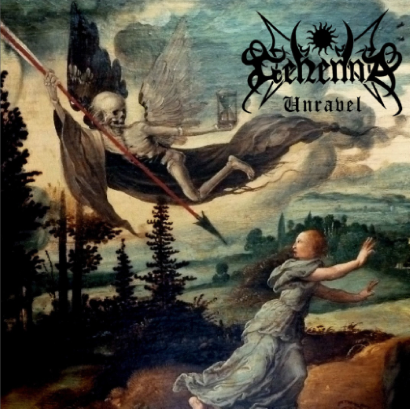 I first heard mention of these guys in an interview with Tool's Adam Jones, where he was mentioning bands that inspired him. Needless to say this black metal band out of  Norway is a lot more burly than the radio prog Tool use to pump out. Though I think there is also a sludge band out of New York who used the name so her might have been referring to them, but their is a sonic dissonance to what these guys do that i can see him appreciating as well .  Without a doubt these guys are  cut from a similar cloth as old Darkthrone, but where Fenriz's project veered into a more rock , punk or NWOBHM direction depending on what era you are listening to these guys stayed the left hand path.

Main man Sanrabb has also been a live member of both Mayhem and Satyricon. His harsh vocal are dry and coarse but very fitting with the oppressive nature of the droning grind these guys favor over blast beats on this one. But this album is so dark and wrenching I don't foresee anyone complaining about them not being cvlt enough. From the opening the album throbs and pulses rather than trying to gallop over you through the  moon lit snow. As it pounds into "Nothing Deserves Worship" that hateful lumber of the album has pretty much set the course. The chords ring out rather than rely on the tremolo picked conventions of the genre, if we are in fact going to say this is black metal, and I don't really hear any reason for it not to be called that, as the riffs have the same soul rotten ugliness of the genre classics. The pace does begin to pick up into the more familiar ambiance of the mcnasties that get blasted out and again in the last minute slowing back into the obsidian murk.

When they do resort to the old ways of speed, I don't see this as being their creative strong suit. It becomes the problem of being too in the face of it being done before.  They do reach a level of white noise that brushes against your ears until locking into a thrashier riff. "Grave Thoughts" digs up the middle ground between doom and black metal.It is full of dark clouds that roll in with the ominous nature of the chords that ring out. The drums could stand to have gotten a little more love in the mix as the album is a wall of dirty guitar and scathing vocals. There are some interesting punches that seem to might not have been a fully realized in the studio as the drums are forced back into the mix. On  Nine Circles of Torture"   the vocals still in the same register but using different syncopation. I like the sonic drive of this where it is as heavy sonically as it is heavy in the metal sense when the beat straightens out into more of a galloping swing

"Lead to the Pyre" gets into blasting darkness that forms the classic drone of old Darkthrone. The vocals at this point in the album begin to make me think they need some variance.Where this song succeeds is in capturing the black ambiance amid the speed and dropping down into a commanding pound. "End Ritual" picks up the paces and carries on the drone established in the previous song but so much so I had to look up to notice it was a new song. TH chords at the end where it slows down are pretty sinister.

After a creepy intro ,  They wrap the album album with a blaze in the northern sky on "Death Enters" it takes a more doomed out plodding but the guitar have an interesting sense of dark sonics to them. I like the feel of this album and I think it will grow on me so I'll go ahead an round it up to an 8. I think for the style of raw old school black metal these guys embrace it shows growth in the songwriting.