Up From the Underground: Xombie - "Capital X" 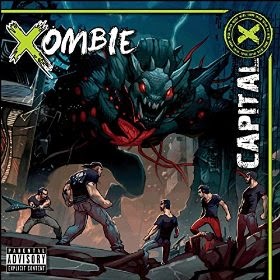 Rap and metal have been odd bed fellows over the years, from the earliest beginnings with Public Enemy sampling Slayer to it's explosion into the mainstream during the nineties where Rage Against the Machine opened doors for it's commercial exploitation. This five piece from New York is ready to make you forget the sour taste nu metal left in your mouth.

They have purged the marriage of most of the cheese laden tricks of the genre that eventually gave this sort of thing the same credibility as hair metal.They do not rely on hiding behind down tuned muddy throbs, instead right from the opener they explode in with more hard core influenced metal. The guitars are well layered created a sonic flare to what they do that eliminates any Korn comparisons.

Clean vocals back the aggressive rapping on "Miss Behave" this coupling of vocal styles is more post-hardcore than anything resembling the boy band antics of Linkin Park. The guitars are consistently this albums' strong suit.They know how to create dynamic builds and breakdowns and work with the songs, rather than burying the vocals or making a swap of distortion the drums can't maneuver.

The first hints of anything slightly funk appear at the intro of "Polar Ice", but it is only a slight wink. There is a groove  established, yet the guitars never force the bass to do all the heavy lifting. Growling vocals chime in from the background, but are used tastefully. On this song the subject matter of drunk driving comes up and at this point you realize that they are not defaulting on whining about mommy issues, but making social statements.

Front-man Adam Crews never comes across as an awkward suburbanite with his flow. His vocal styling remind me of a cross between Atmosphere and Mike Muir of Suicidal Tendencies.  The hey on the hook to "Rotten Apple" is the first thing that reminds me of  anything resembling the nu metal of yester-year, but all other leaning toward P.O.D are scarce. The title track employs gang vocals and a section where the band drops out and lets Crews carry on his frantic freestyle, with a much more hardcore slant , though the exotic scales used in one of the bridges is more metal.

Up until the albums final moments on "Friday" they steered clear of using turn tables, but by the time they jump out of the punk chord progression, it's hard to hold it against them as the song is pretty funny and it's clear they are not doing this for the nookie. They only bands from the nu metal era they come close to sounding like would be are Rage Against the Machine and Hed Pe, two bands that handling the hip hop elements of what they did pretty seriously.

Regardless of how guilty pleasure nu metal might have been for you, these guys have enough in common with hardcore and a legit attitude in what they do . Granted if you only listen to stuff heavier than Darkthrone then anything with rap elements might be a tough sell. I do think this will appeal to hardcore fans going back all the way to Suicidal Tendencies and is well worth a listen.
Posted by Wilcifer at 5:29 AM