Morrissey: "World Peace is None of Your Business" 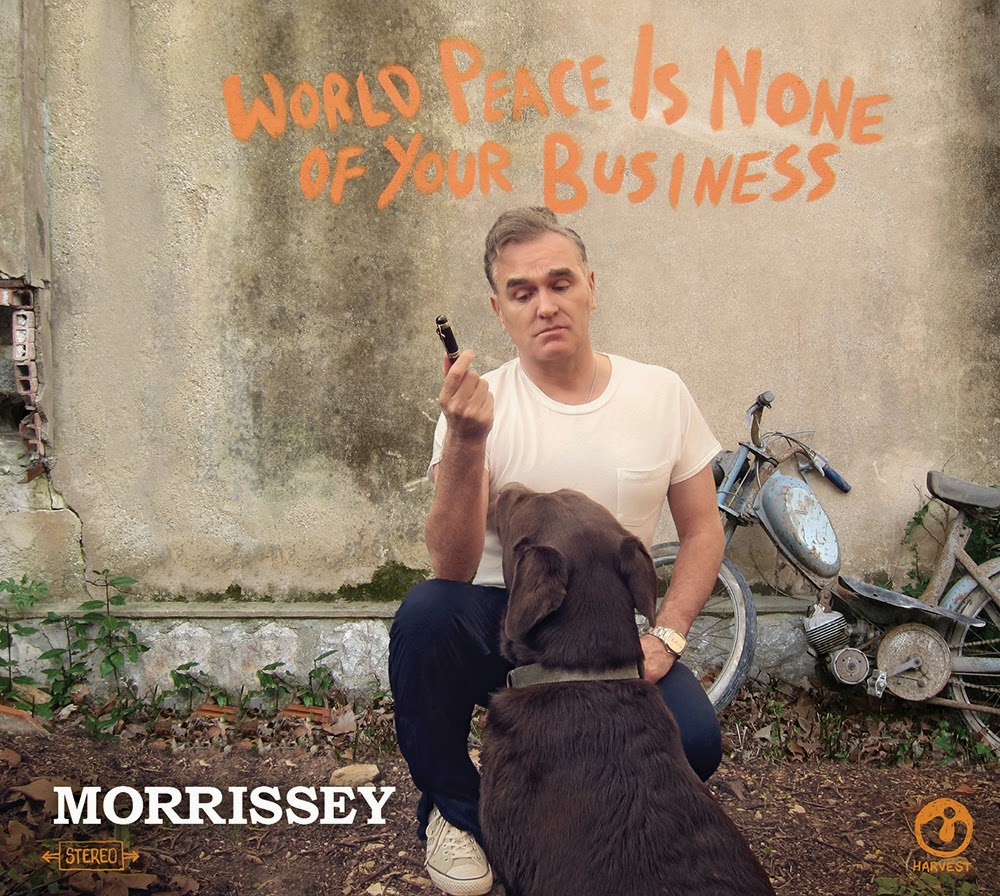 Before you think this is just going to be a biased worship service, there have been some Moz albums that haven't blown me away. " Maladjusted" and "Years of Refusal" have both gotten significantly less plays than his other solo fare, which according to Last FM not surprisingly comes in behind the Smiths. Like the Smiths this album is more eclectic than his previous work which tends to have a largely unified vibe. Here he uses all 18 of these songs to explore a world of sounds. I have the deluxe edition so I am reviewing all 18 of those songs rather than cutting it off at "Oboe Concerto" .

This is Steven's first album for Harvest. He has already released three singles . The first is the albums opener and title track, which is much less venomous than what I expected. This album is not a rocker like "SouthPaw Grammar" and holds more in common with "You Are the Quarry". I am warming up to the title track, the vocals did not fall where I expected them to which takes adjustment. The second song "Neal Cassidy Drops Dead" is a much better song and what I expect from Moz even with the more electronic elements. The lyrics are clever and bite where I need them too. Moz's voice doesn't sound aged except when he reaches up into his falsetto later in the album , but we will get back to that. There is a beautiful guitar break in "Neal Cassidy..." that is unexpected and a reminder that while it's no Johnny Marr on board , Boz and Tobias are no slouches.

Not sure how the 2 mins are required to get into the odd musing that is " I'm Not a Man" . The vegan anthem this becomes , cheers itself forward past the weird synths , but never climaxes like I hope. Instead it ops for getting noisy and weird. This producer also worked with OingoBoingo so maybe that's where it comes from.

The second single is "Istanbul" which has some driven behind the jagged jangle of the guitars , with sitar sounds layered on the edges. It's smartly written and arranged even if it is not among Morrissey's most compelling lyrics. I want more cynical self loathing  and less of the world commentary, though that is some of the thematic elements this one draws from. The Latin guitar against the electric undertow of " Earth is the Loneliest Planet" brings you to a familiar place but with a much more psychedelic groove than what you normally think of when it comes to Morrissey. But hey it works,though a weird choice for the third single.

"Staircase At the University" is pretty classic Morrissey. Lyrical and vocally it hits all the right spots . Its a narrative that depicts the shamefully beautifully picture of dysfunction Moz is the best at observing. The vegan theme returns on " the Bull Fighter Dies". Moz is rooting for the bull, in this mid-paced number that feels like it could have been a Smiths song. The guitar takes on a more rockabilly vibe in some of it's phrasing.

More experimentation transpires on " Kiss Me Alot", but in the best way possible as all the elements you want from him are in place.This song has the swaying skip to it despite all the varied elements of world music that collide behind it. The more ballad like" Smiler With Knife" is at times as awkward as the it's title.This one is going to be the hardest to grow on me, I think the lack of percussion adds to this. The lyrics hit on some good points like  "sex and love are not the same" When drums do come in it's in the songs third act and not as effective, though after further listens the songs seems to become more droning and dreary almost like a kinder gentler Swans outro.

Another classic in waiting is "Kick the Bride Down the Aisle" . The lyrics are what was needed. Morrissey's croon is youthful for a man of his years. It doesn't rely on a big hooky chorus , instead sways it's way along rather gracefully. "Mountjoy" is an acoustic number, with a folk like strum.Some strings moan their way in the background. Moz's voice sounds fine here, but the melody doesn't do much for me.

The song that closes out what I suppose is the normal album, is " Oboe Concerto" that is a lazy crooner not unlike some of his other solo work, perhaps the more recent albums are the best comparison. It works for what you want from him. So if this is what you see as the stopping point then the album gets a 9. But real fans I'm sure will want the other six songs. So we aren't done here at Abysmal Hymns.

"Scandinavia" made several appearances on what was his last tour of sorts that met a predictable demise. This sounds like it could have come from "Ring Leader of the Tormentors". Its nice and dark, though being a Scandinavian I'm not sure what context I should take the lyrics. So I will take "then you came along" as being me, though he eventually ends up kissing the soil.

"One of Our Own" brings us back to more of the experimental moments, I find it makes more sense knowing the producer also worked with Dredg because this song reminds me of them. It maintains the darker path "Scandinavian" set the album on. The guitars are doing some interesting dissonant slices of sonics.  The return to balladry on "Drag the River" brightens the clouds. The guitars kick in but don't force things to rock, and let them breeze along.

"Forgive Someone" goes back to the more Cure like synths that haunt the surf like guitars. The guitars seem to be carrying most of the weight as Moz waltzes around where the melody should fall, but if he went the obvious route it wouldn't be him. This sounds like it might have been written years ago and they just got around to recording it or he has been going back and listening to his old Smiths albums.

"Julie In the Weeds" reminds me of "Just My Imagination Running Away With Me". The guitar tone is really cool here and for most of the album . This producer's strong point is certainly guitar tone. Halfway through almost progressive tone simmers up, but its more relaxed than say Genesis. Going back and hearing the falsetto at the end of this one , its not as bad as I thought it was. Though that yodel might be on "Art Hounds" . "Art Hounds" would be weird if this was the only song you heard from this album. It comes close to being a more rock number, like "Boy Racer". The sounds comprising it don't rock in that obvious of a manner.  Yes, these are the yodels I was thinking about , they aren't what they used to be, but don't make me cringe like I thought they would on first listen. In some ways his voice sounds older here like Bowie's does sometimes on his last album. The lyrics sound like they are taking stabs at hipsters.

If you stuck it out and tracked down all the songs , then you would understand why ultimately this can be rounded up to a ten. The fact I had to round it up means it is different and has to grow on you rather than grabbing you with a sob from the get go. But with each song it is fonder.