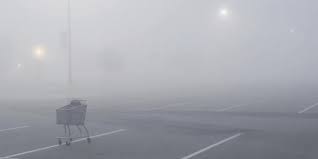 This marks the Chicago band's first release on Relapse Records. They have been labelled as being experimental, drone and black metal, but on this album its not clear how fitting some of those monikers might be. Sure they have a hypnotic element to their music that lulls you in but I tend to think of drone being more of a minimalist art form than the texture and layers they have simmering over one another on this album.

The opener has almost a Cure vibe, though the production of the keyboards sounds almost identical to the last Circle of Ouroborus album. The vocals have an almost black metal scathing to them and are the heaviest part of the song. The vibe of  " Visitation From the Wrath of Heaven" feels more like a jammy post-rock band, it recalls those moments the Greatful Dead would hit live where they were waiting for the spirit or the acid to move them in a more congealed direction.The direction this band finds just happens to be varied shades of heavy.

There are more elements of sludge than black metal which is becoming more of a comfortable blanket for all things dark and heavy." Two Moons" swirls it's self awake with over driven synth swells . The embellishment of the guitar never allows anything to carry you a away like white noise. If drone means not allowing it to fully develop dynamically then I can where on a song like this is might apply.

The band apparently likes to claim Kraut rock as an influence and if you want to get fancy and hipster with what you are calling goth then I can see how that might get thrown around with the title track. The low moaned vocals ringing out from the distance help color that vibe. Midway they hit a metallic swarm of bees that hits they drone place they are going for. It does challenge the listeners endurance which I think any music of this ilk should do . It becomes heavy but not in a metal sense , when when the drums kick up dust. There's  few second here where it sounds as if they might let go into some genuine black metal, but they are never maintained for long.

"Exiting the Hall of Vapor and Light" creeps in on a visceral swathe similar to mid-period Swans. This creep doesn't begin to take off until three minutes into this five minute long song, so maybe I'm wrong but drone is coming across like wearing a chastity device ,  deprive your self from the release , limit the pay  off because that would be the easy way out ,  it makes for cool sounds but not a good song here.

The kraut rock tag I can see only in the sense that the song " Panorama of Mirrors" feels like something from an eighties sci-fi soundtrack, though less Tangerine Dream. This does build into some rather minimalist drum hits and black metalish screaming. Once again we get the benefit of some cool sounds that turn into ideas no fully mapped out. I understand  the tension in not resolving  and like the hypnotic elements but I need  more pay off.

The fifteen minute monster that is " Obsolete Elegies" begins with more melody than most of this album has show, though there is enough ambient noise to satisfy those who obviously must think conventional song writing with hooks is not abrasive enough for them. The intro section is the first five minutes then there is more sci-fi sounding stuff with some post- rock single note swelling. Then song then devolves into some feedback before going blasty The blasting has a very programmed feel to it .The albums best moment is the melody in the final minute and a half of this song.

Some of the more minimalist stuff on here isn't my thing but its well done so I will give this one a 6.5
Posted by Wilcifer at 1:27 PM