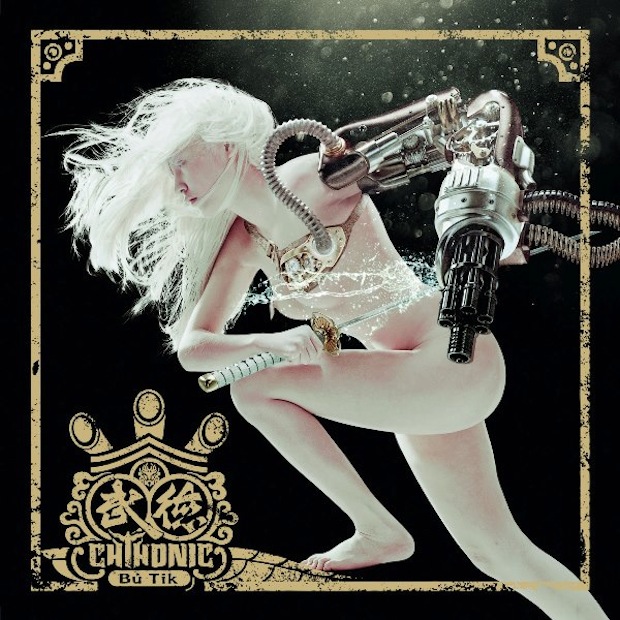 I think my inability to embrace the band fully was caused by the same type of prejudice black metal purists have with Dimmu Borgir who many see as putting their grandiose image before staying cvlt and leading to them becoming more of a symphonic metal band. Dimmu for me got grandfathered in so I saw them as just evolving even when they lost members and slowly began to look even more like super-villains.  I think the double whammy for the band in this regard is how  bassist Doris Yeh  gets pushed as a sex symbol on magazine covers, not to say she isn't hot, she is... but in metal circles this causes the band taken less seriously marketed So giving this band the same benefit of the doubt I think others should give Dimmu and just focusing on the music being good metal, however non-black it is, I have gone about listening to this album and it seems to band has grown just in time for willingness to accept them as just metal.

After some cinematic fanfare the album gets underway with the first single " Supreme Pain For the Tyrant", it  has more groove and the riffs have a thrash fine tuning to them so there is less pretense here that this is black metal in any sense aside from perhaps the screech to the lead singers voice. The guitar solo is pretty impressive, who knew there were these kinda chops hiding behind all that make up. "Sail into the Sunset's Fire " is solid  in execution, the guitars sound big and great, the drum sounds is equally massive in scope. It's a great sounding record though this make it's all the more aligned with the symphonic label though would be heavier than any other symphonic band aside from Dimmu, who despite their pomp are darker, comparison's can be drawn, though when it comes to shreddy guitar Cthonic wins.

When it comes to "Next Republic" its seems the riff speedometer plays against them slightly until the vocals help out in the syncopation, but there is a similar relentless speed in the first three songs , though it accelerates here until the solo section. " Rage of My Sword" befalls a similar blur of speed, the chorus shows some potential for melody but it's like running down hill with double bass sneakers on. Not to say it doesn't touch on my cool riffs don't make a song rule, so guitarists in particular might might look some of the dynamic flatness, they is colors with some of the ethic instruments.

"Between Silence and Death" stays the course with the speed but reaps the benefits of a Amon Amarth like intensity to the hook of the verse riff that powers past the similarities in tone and they match this by getting more majestic in the chorus. "Resurrection Pyre" has a more up beat almost power metal feel to the intro that roughens up on the verse. The redundant tempo starts to irk me and then I hear a little melody layered in a way like alot of folk metal bands who are black metal bands in disguise did a few years ago. The blend of the mix isn't as keen here even the guitar solo kinds sits back in the murk. Good guitar playing, though the song is on the flat side of the dynamic rainbow.

"Set Fire to the Island" has a little more melody to though the jagged riffs often clash with one another, until the spot light gets turned back onto the lead playing which deserves every bit of spot light it catches from the mix. " Defenders of Butik Palace" takes a sweeping turnin to a symphonic thrash, though they don't let up on the gas until they congeal into a chug. The chug prevails to guide this song to glory, despite its rapid pace that by the end of the album doesn't seem any faster than anything else. To their credit it does have a less mall metal feel than the overt grooves of some one like Behemoth. I'll give this album a 7.5 as it sounds great but could use a little dynamic pacing though fans of straight up symphonic metal looking for something different can call it an 8.