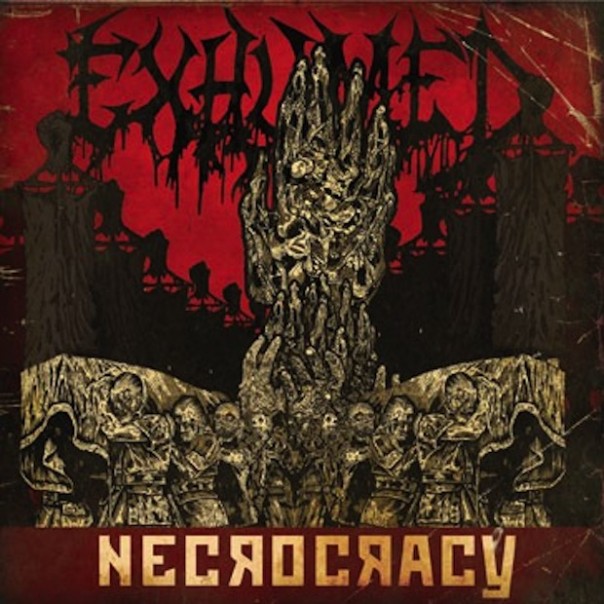 This California band has been following in the footsteps of Carcass since 1992 playing what they call gore metal. This is their sixth full length album and marks the band showing many signs of their own personality in their ability to blend elements of grind core and death metal together in a way that will appease the hipster metal purists but still manages to sound fun when you crack open a case of beer to it .

It rips out of the gate with some fairly run of the mill death metal that relies on its aggression and the cool thrash groove of the verse riff, but cool riffs alone does no make for a good song. They follow up on the second song with more originality, some of this is on the production end , but the use of rawer almost grindcore like abrasion makes " The Shape of Deaths to Come" stand out and renew my hope for the rest of the album.

The title track has drums that pound like this sort of metal should and a good groove to it balancing out the almost retro thrash feel with death metal brutality. The vocals which spew what could be the chorus hook have an old Carcass feel to them. The Carcass comparisons don't stop as the groove from "Dysmorphic" has has a Heartwork vibe  going, in the harmony guitar parts. The smoothness of style is just a dynamic for the band as they can vomit up some raw brutal viscera on a song like "Sickened:, though their more musical moments help give the songs more identity.

Songs like "Ravening"  are a reminder how they are more effective when their speed is kept in check as this one reaches the upper limits of  the beats they can clock in and still keep things varied enough to be interesting even though they display how when they slow down into a groove the riffs benefit the most.  "the Carrion Call" takes on a more straightforward death metal feel, though the vocals loosen up into a more punk attack making the lower guttural coating on top stand out more. The title of the song is chanted in a way that sticks to the corpse's bones.

"the Rotting" starts off with a chug that gradaully builds momentum into a death metal blast, that has punch but is not their most effective weapon when over done as it can be on this album. Here is the plight of most death metal which doesn't lend it self to progression and melody as well as other metal sub-genres. When its time to solo they soften the ground to plant their shred, however many of the songs could have benefited from this kinda of texture.

Every thing from a production stand point , sounds great there is enough rust where needed to create the sound of instruments in distress that I am sure has to be a pretty accurate depiction of what these guys are like live. As far as playing going the execution is dead on and the guitar playing exceeded my expectations going into this. I feel they took the easy way out though when it comes to the big picture  and it seems like they are playing dumb for the sake of their audience that I suspect to some degree would be open to slightly broadened horizons musically and defaulting back to the dumbed down color by numbers grinding death metal is the easy way out so I can only give this album a 7 as it gets old after while and is only kept alive by their more adventurous takes on songwriting.