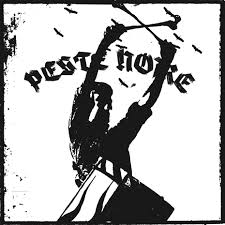 The album opens with a four minute instrumental intro, which for the sake of rating this album I'm not going to count as a separate song. "Demonarque" is a long sinewy epic than runs the dynamic gambit much like their previous album, though this album is much rougher around the edges.  They occupy a similar place as older Sigh here, but with a wilder abandon. The dissonance in the guitar sounds like Burzum, but their is also a gypsy feel . In the last four minutes there are drunken choral sections and liberal use of acoustic guitar.

"Le Beche Et L'Epee" barrels into a blasty intro  before it simmers down into something more like depressive black metal written fora spaghetti western. The raw quality of this album in some ways feels like a step backward for the band. After a few listens it somewhat grows on me as it contributes to the ambiance. They do hit some big moments of sound one being in first minute of this song, but the roughly produced layers of vocals sit abrasively atop it. They guitar work on this album is greatly improved there is much more computational detail in the more picked out chords. The drumming has improved as well on some of the double bass builds, though the playing through out is never typical metal.

"Niquez Vos Villes" has an unexpected  rock groove to it, the vocals are like Attila from Mayhem , in the sense he bellows and howls in every direction. They are  not harsh enough to be considered screaming but not comprised of actual note either. Midway into the song there is particularly heavy riff, the chug build gradually through out the song until it almost becomes a death metal like movement. Horns blare over the churn when it kicks in.

"Le Clebs Noir" the first  two minutes of this song they are winding up out of a murky disjointed congealing of guitars . There is a section toward the end of this one where it builds into what is more typically black metal.

This album doesn't take the Mr Bungle winding road their last did yet there are still weird blends of melodic embellishments on " Ode" a song that is largely acoustic based. This album might be stranger because on the last the herky jerky nature of the trips it took you on you knew that you didn't know what to expect but on this one the songs are more structured in the traditional sense but they have been put together with really weird ingredients.

Some of the riff take on a more rock n roll feel and this album has a lot more groove, particularly moments like "La Blonde" which reminds me more of Shining in the vocal wretchedness. The female vocals that surface here are sexy but have that awkward feel like the female vocals in Celtic Frost's " Cherry Orchards". I can hear other hints at Celtic Frost influence in the unorthodox way the song writing is approached, more so than any traditional black metal.

The album closes with "Moins Trente" and while I do miss the sleazy feeling that coated their last album, it has been replaced by a strange desert like emptiness which is what brings to mind a more depressive vibe. This song almost opens with a doomy feel  that is fleshed out by a string section. The song picks up speed in the final three minutes.

I'll give this album a 9, the songs are well written and conceptualized  but the rough production is a lateral move from a band who raised the bar for themselves on the last one and while I can understand not wanting to keep up that sort of spastic intensity and favoring ambiance, I think there are a few moments on this album that settle for just being good rather than always mindlbowing.