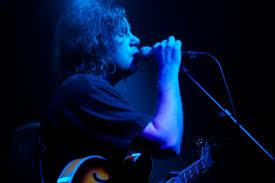 Having seen the former Acid Bath front-man preform with a backing band in the past there was some trepidation when the show started with  Dax and his bassist sitting  in two chairs on an elevated platform. Dax was playing an acousticguitar  and  his bass player was plugged in.  They then launched into to an unheard selection of  songs with  no explanation as to if these were songs he was wood-shedding for the new album to follow up 2010's say good night to the world.

The  number of people in the crowd  who yelled out for songs from his first solo album "We sing of  only blood or love"  out numbered the stray calls for Acid Bath songs, which is a triumph for him to emerge from that shadow.

The first solo song to surface was  "Demon Tied to a Chair in my Brain"  they got the general gist of the songs dynamics down  even  with the lack of a drummer, as Dax would put more into the strum of his guitar. Though there were no wailing solos coming out of the fray like the electric version has , so the rock was dialed back a bit. From the "We Sing of only Blood or Love" album "Radiation Blues" and "Night is the Notion" also made appearances. The latter was more powerfully preformed at the end of the set with Dax belting the needed parts with authority.  Of  course "Radiation Blues" was much less rowdy. The arrangement of " I hear Satan" was even bluesier than the studio version.

I can say of the new stuff songs like "Far from Bethlehem" peaked my interest in hearing what a fully actualized version of the songs might sound like, so from this perspective Dax succeeded in doing what he set out to accomplish. For the fans I suppose its a mixed bag even if they are content without hearing Acid Bath songs, though I feel songs from Agents of Oblivion or Dead Boy and the Elephantmen could have worked within his set and given the crowd an easter egg or two.

The draw back to the way these new songs were presented  was that in the context of being acoustic numbers they took on a similar feel. This was both a strength and a weakness as the set went on. The signature elements of Dax's songwriting were clearly intact, they were dark with ominous lyrical imagery walking the tortured line between sacred and profane. The problem being without other elements to flesh the songs out they began to all sound the same.

I can now say that I have now seen Dax Rigs preform acoustically in an intimate setting , so  if  this is something you need crossed off your bucket list then make sure to catch him when he rolls through your town. If you are not already a fan I would suggest picking up his two solo albums first as this tour isn't the most accurate representation of how some of these songs are best showcased. I willl be intrested in what ever the finished product turns out to be .
Posted by Wilcifer at 9:01 AM