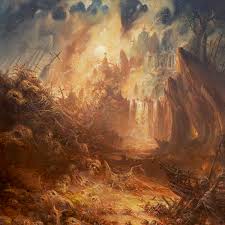 In the shape I have been in the past few days , I had lost all interest in music.When I  did try to listen to it I became annoyed , because I feel like I left My skin hanging up in the bathroom. After I did the weekly shuffle column, I found a few things tolerable so decided to give this Lycus  album a shot . They are a  funeral doom  band  from Oakland California ,  formed back in 2008 , so have been crafting this for some time. The drummer used to be in Deafheaven and also plays in Temple of Saturn. Though aside from the occasional dissonance of a chord here and there the connection to Deafheaven is not apparent.

The songs... and there are only three are on the long side, the first "Coma Burn" is eleven minutes, it has the funeral doom sound I like h in the same ambient sonic scope as Loss and Mournful Congregation. There are clean moaning chants layered behind the low growl. The needed balance of melodic beauty and morbid dissonance is there filtered through a cathedral like decay. The guitar tone is organic like Pallbearer but there is even less Sabbath influence present, as every thing is held together in a more angular fashion that sets them apart from their peers in the genre. It doesn't take on a more conventional Metal sound until about for minutes into it and them it brings back memories of old My Dying Bride. This is what it sounds like when the abyss stares back at you.

"Engravings" has a slight bit more of a chug to it than the first one which drifted like a ship in the night. This is the shortest song on this album which would be an e.p but it clocks in the same running time as most albums. The pacing is so similar this almost feels like an extension of the first song, the melodic embellishment on the guitar lead lines the most marked difference and the punches come at different places, there are some almost black metal vocals that haunt the reverb drenched back end of the mix. Which has a big cathedral gloom to it  as sort of thing should have so this album sounds great.It captures the moment I have often noted where the line between funeral doom and depressing suicidal black metal becomes thinnest. There is a cool creepy post- whatever moment at the end, where the bass adds some distortion and cut through over the more lethargic airy guitars.

"Tempest" has a very beautiful brooding to its intro. At a very ambitious twenty minute running time it comprises half the album what you would expect more from a prog band though it is an increasing trend in metal these days. The chants precede the growls this time though both are layered once the song begins to find form from the ambiance. The drumming is pretty impressive there are some jazz chops frequently hinted at particularly as it circles the place the song drifts. At about the five minute mark it sounds like Celtic Frost in collision with King Crimson before a full on blasty mc nasty part rears its ugly horned skull. This doesn't dominate but a minute of the song leaving the vocals to take on a more black metal screech in its wake. In the songs final eight minute they hit a groove similar to bands like Pallbearer before they fall into an ambient void . This is more abrasive a change than the possessed contortion into black metal. This closes out the album and it adds to what could have been a more stream lined experience the drone element intended to hold the challenging element .

I'll give this one a 9 it hit the right spot this morning but holds a very unique sound that is not hit by other bands in this genre though the key elements to make it funeral doom are there , which is becoming a genre that rivals black metal in its willingness to experiment. If you are a fan of funeral doom this album is a must have and might be the best doom album of the year so far,