the Von Deer Skulls : "the Rest is Silence" 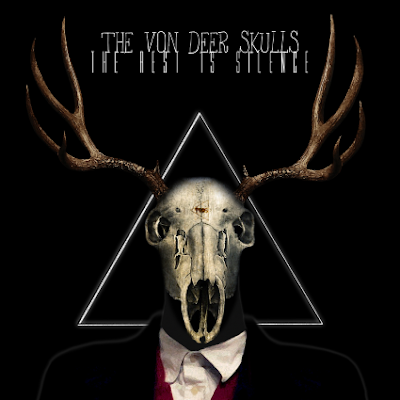 I can block out the fact that these guys wear masks. This is lusciously dark. Some of my first thought after hearing the low muttered disgruntled vocals is this is what Korn might sound like if they had allowed themselves to grow with the times. They cover a lot of ground in the eight minutes of the first song.If I am really going to nit pick the genre lines, I would say this falls closer to sludge than doom. The slow heaviness places more emphasis on oppression on than mourning. The spoken section going into "the fall of the Raven" makes it clear these guys are from France. The more oppressive mood is the driving force of this song as it lumbers a more droning course. By the end of this song they put a similar weight into what they do as a band like Zoroaster, so it leans a little closer to doom in that regard.

From the description of this band in their press release I was imagining something along the lines of Sleepytime Gorilla Museum. They come closer to this one jazzy blues weirdness of "Twilight of Innocence".  They have a more bizarre disconnected groove somewhere in the angular math of " Birth of the Freak". If you like trying to count out Meshuggah's time signatures then you will have fun with this one. The bass playing is totally on point here. The pace picks up and it almost sounds like they are busting into nu-metal with some of the rapped undertones to the staccato vocals. This is not the only place the ghost of the 90s haunts this album as it's influence can also be heard in the vocals to "the Fake Me" this evolves into a chaotic industrial strength pounding.

This album varies in it's degrees of heaviness and is elusive in the attempts to adhere to any one sub-genre, but the mood of these songs is a similar mixture of darkness and depression fueled anger. The vocals stay in lower register with varying degrees of grit and growl attached to them. There is a weird ambiance over the slithering bass of "Swan Song", this reminds me a little of Christian Death. The build on this song is more subtle than the others as they ride this one out further into the twilight. The album ends with a barrage of formless noise they have titled "Ritual" despite not being a song in any sense of the word. I'll round this up to a 9.5 as this is a very unique album and these guys have molded the sum of their parts into something original even though you can hear their influences under the surface if you have a good ear.  Either way this is very engaging piece of darkness and renews my hopes for France as they are not pumping out the weird metal like they used to.